The drive from Tralee to Waterville is quite spectacular. It encompasses the first half of the Ring of Kerry--a scenic drive that people travel from far and wide to enjoy. Reminiscent of a drive down Big Sur, there is nothing but big blue ocean just over the edge of the roadway. You wind up in the small town of Waterville, which, of the towns we stayed in, was certainly the most quiet.

I am going to start this review by acknowledging the fact that I am in the overwhelming minority and must have simply missed something. I have heard that Waterville is Tiger's favorite course. Before going on this trip I saw a special on the Golf Channel where an analyst rated his favorite Ireland courses and put Waterville first. There is no excuse I can cite--the weather was perfect, I played fairly well, and it was among the calmest days we encountered--but I was just not overwhelmed by the course. It was not nearly as scenic as Lahinch, Ballybunion, Doonbeg, Old Head or Tralee, but, that is not necessarily a problem. I loved Portmarnock, which is similar in its scenic value to Waterville. My main complaint was simply that I did not find the course particularly interesting. It felt too much like an American course with a bit of Irish flair (and not like Bandon Dunes that recreates links golf amazingly well). Waterville actually reminded me very much of the course I played growing up in the Hudson Valley (which tried to be a pseudo links course). To be sure, I was really lucky growing up to play that course on a regular basis, and I would happily play that course every Saturday going forward. But, it's not what I travel to Ireland to do. All this being said, I am disappointed that I did not love this golf course.

One of the lasting impressions that I had of Waterville was that it was peaceful. Like its town, the course was quiet and tucked away. Unlike other courses, it was not right in the middle of a town. Also, most of the holes were not exposed to the ocean with a wind constantly ringing in your ears. I will admit that it was certainly a nice reprieve from the gale force winds of Tralee.

Now onto some of the individual holes.

***On all of my reviews, you can now click on the first image to see a slideshow of all images on the page.

The first is a 395 yard par four that is fairly straightforward. 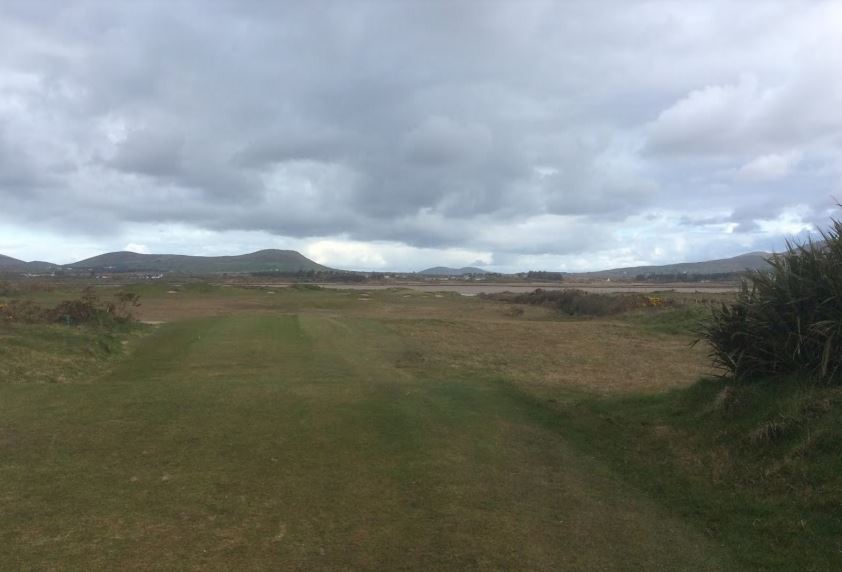 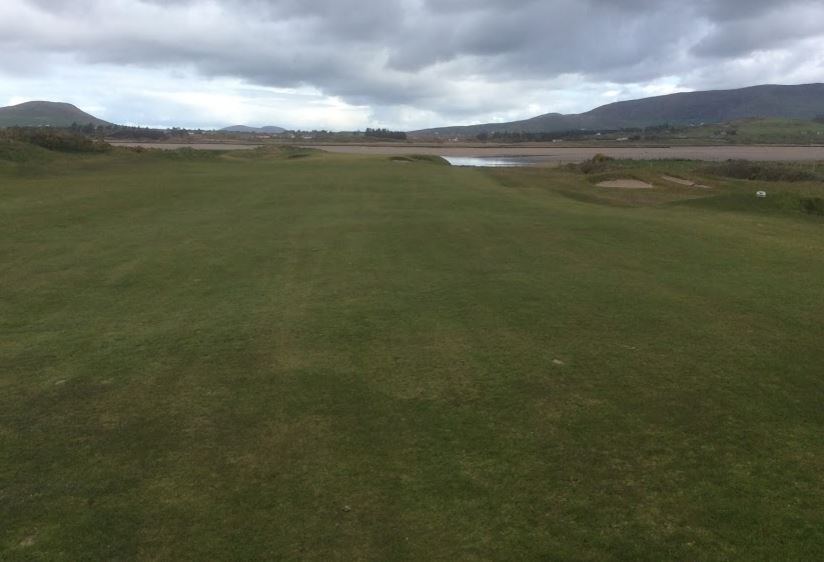 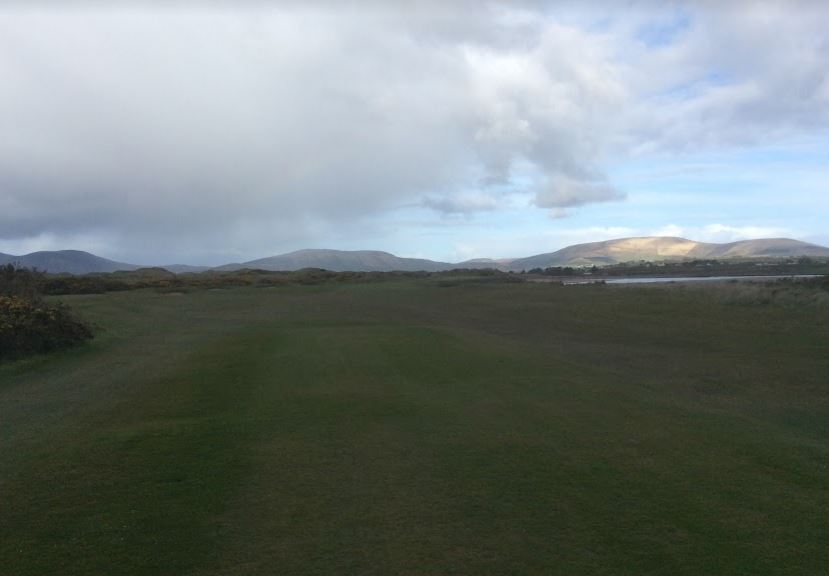 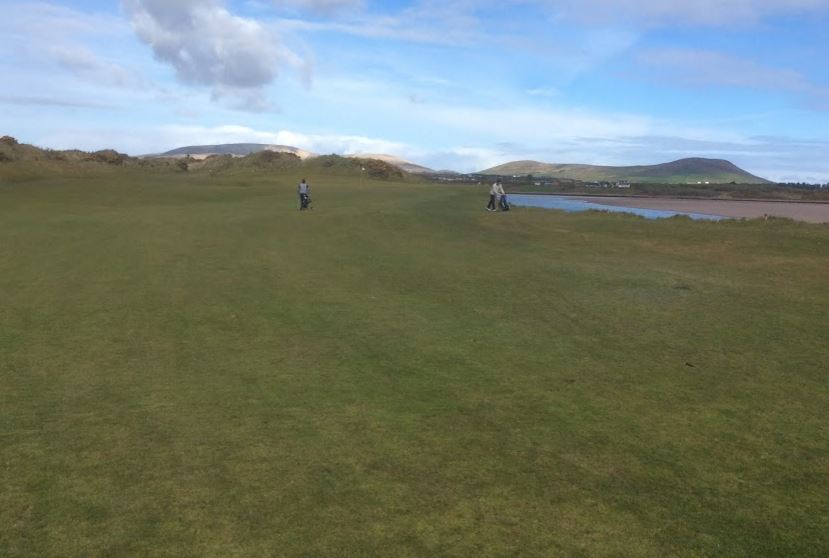 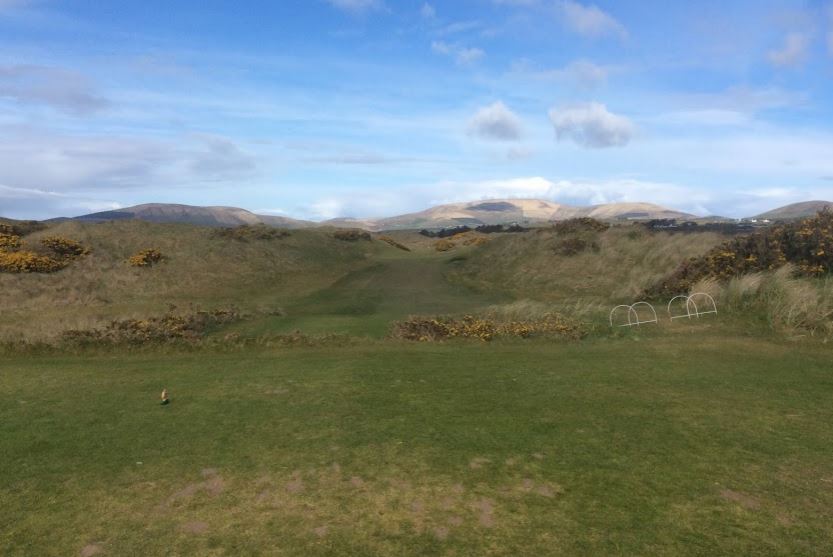 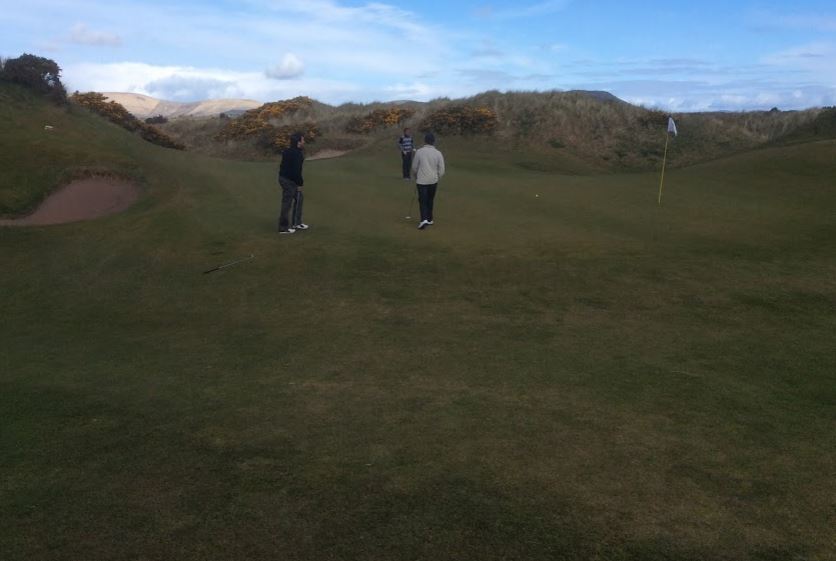 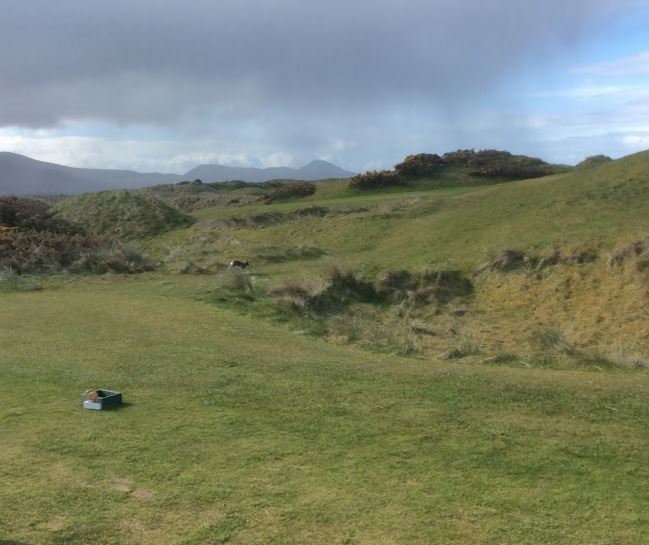 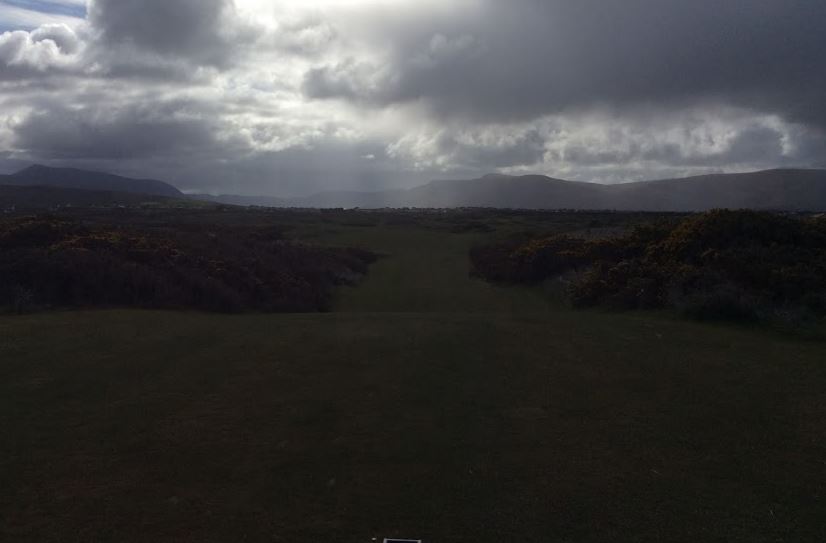 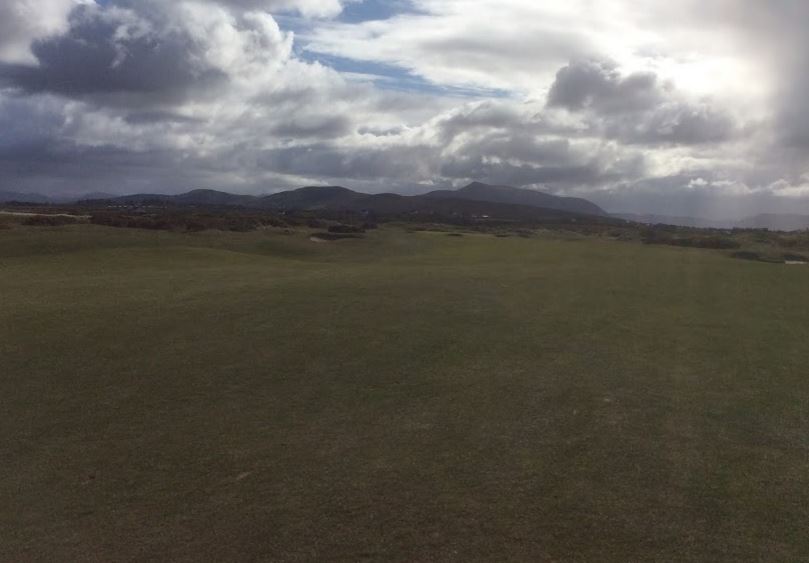 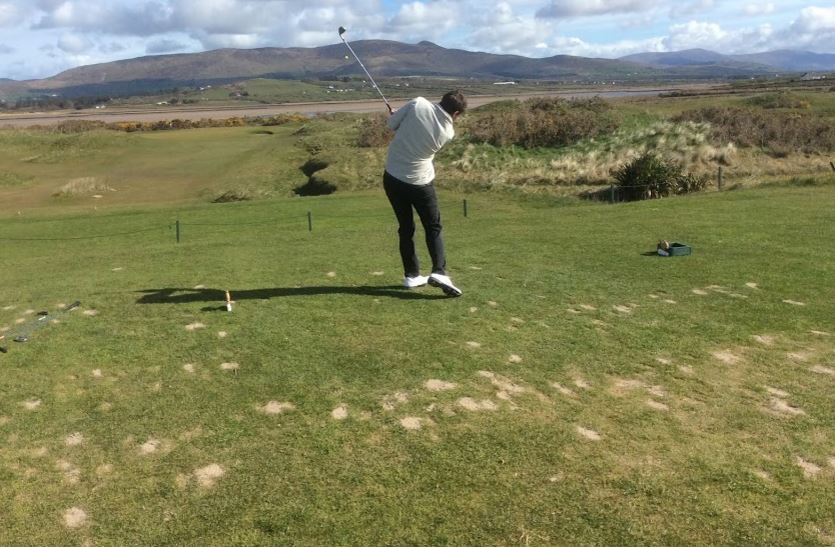 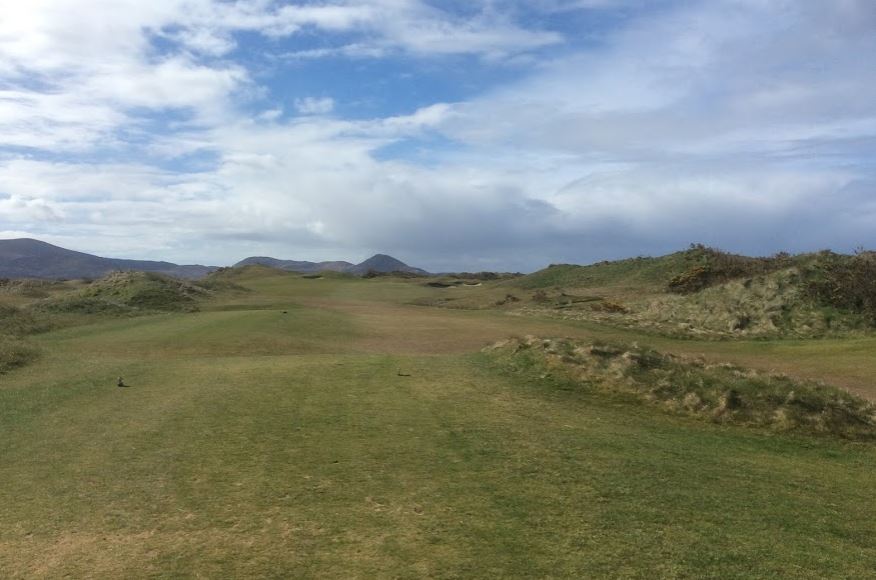 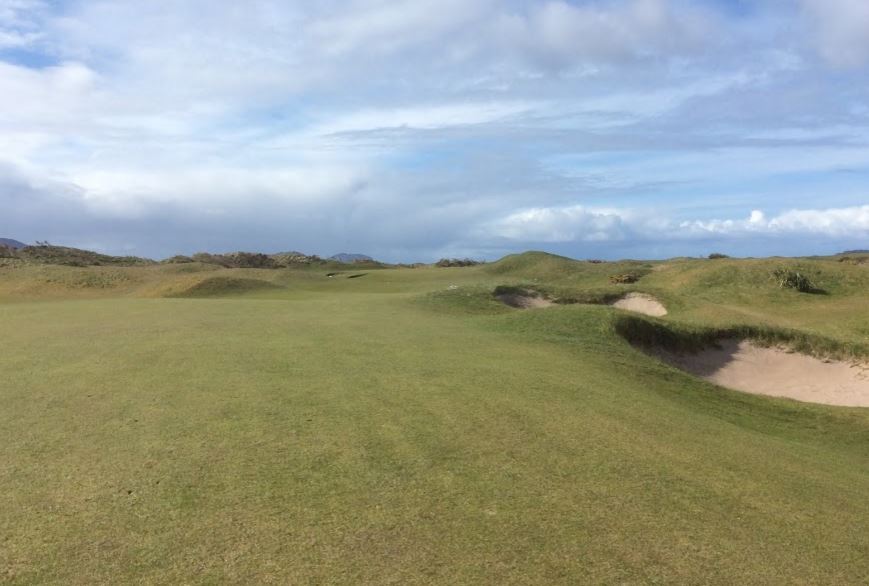 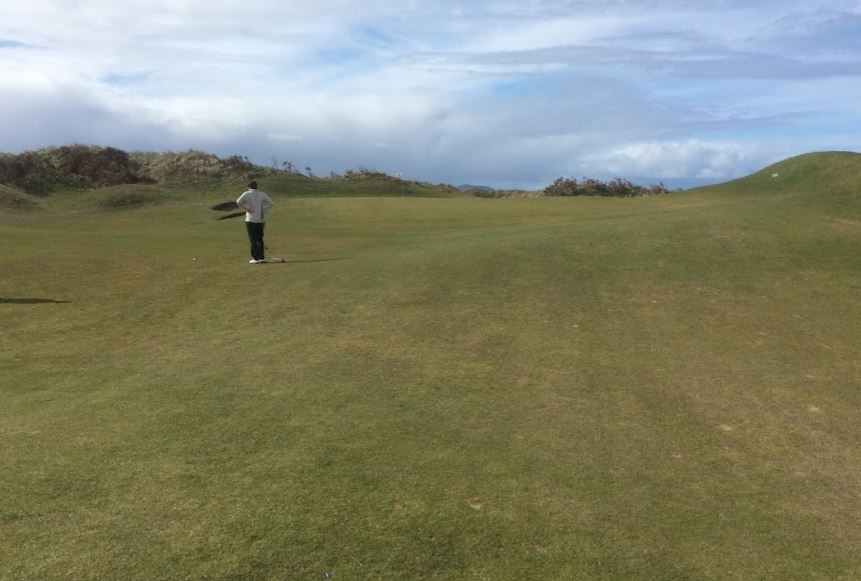 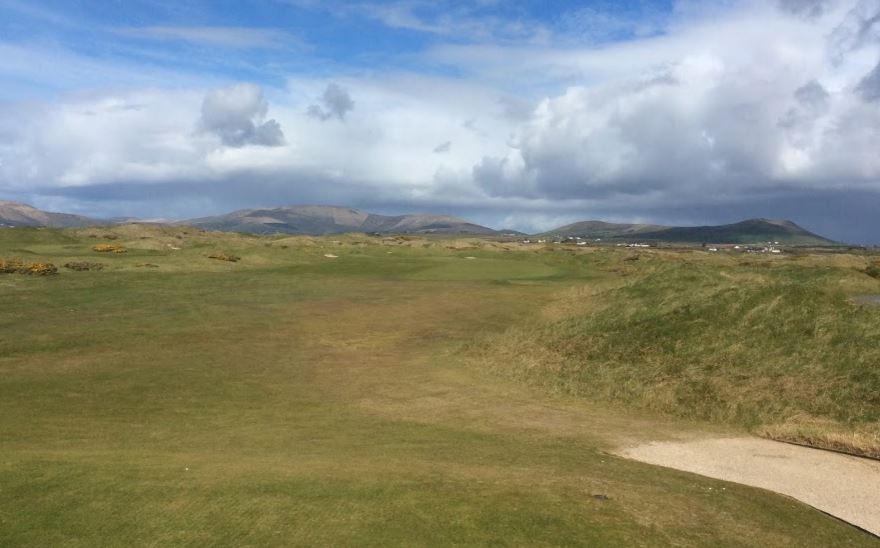 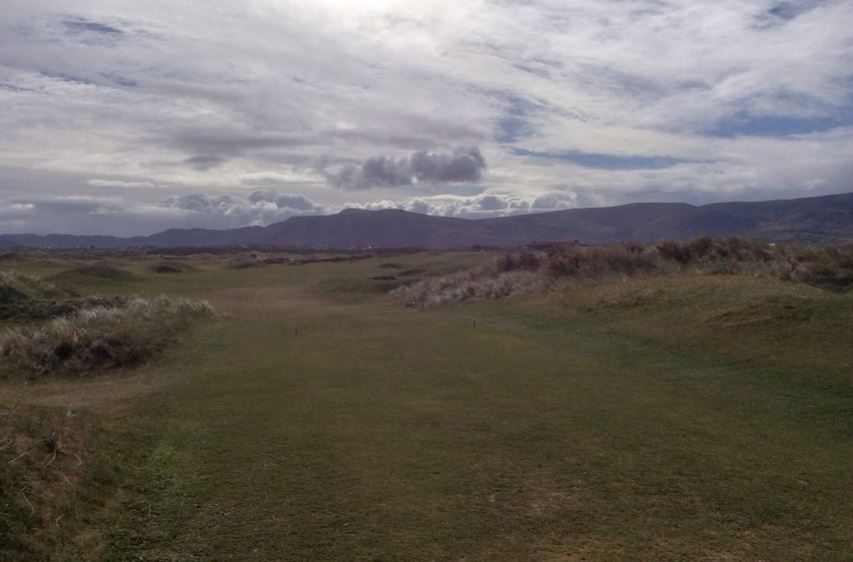 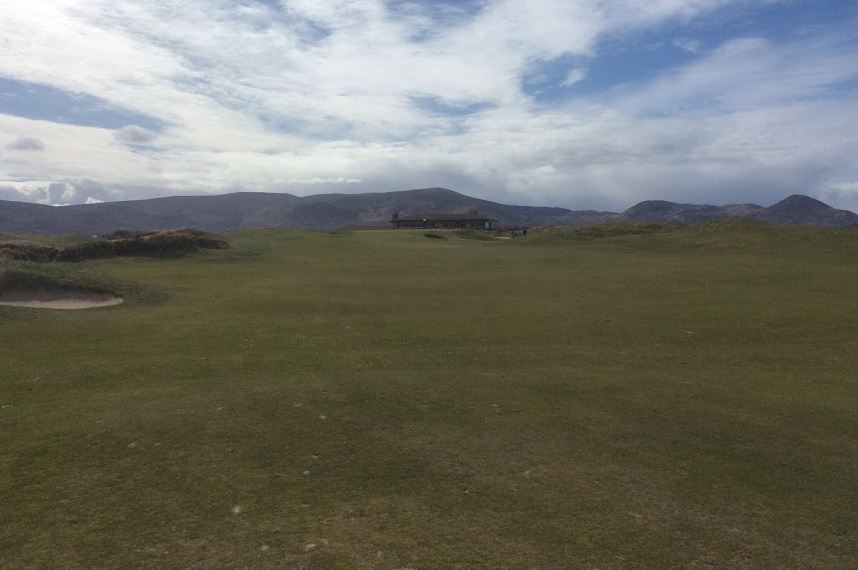 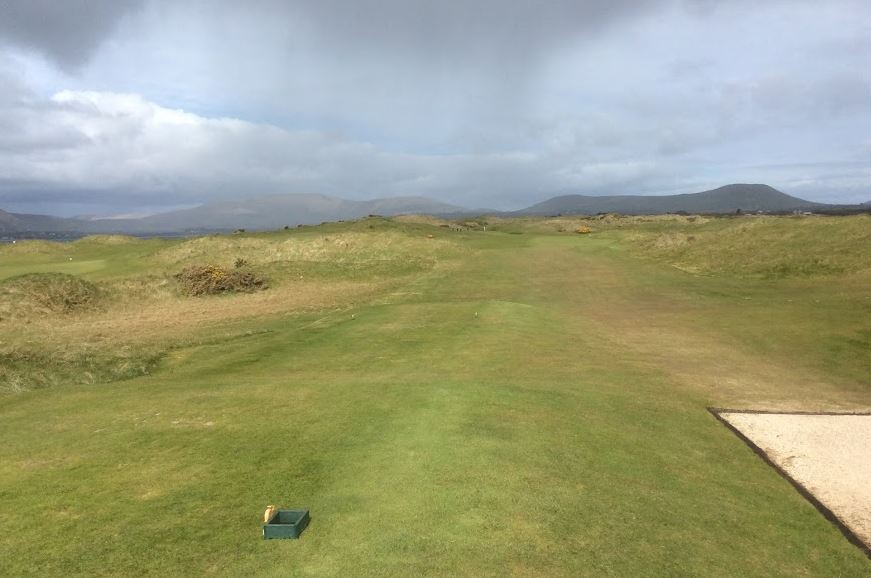 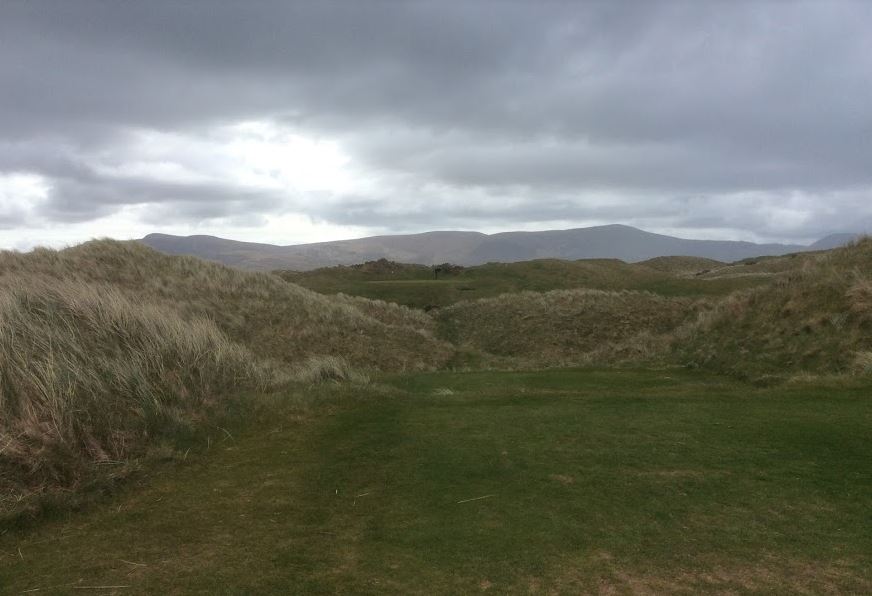 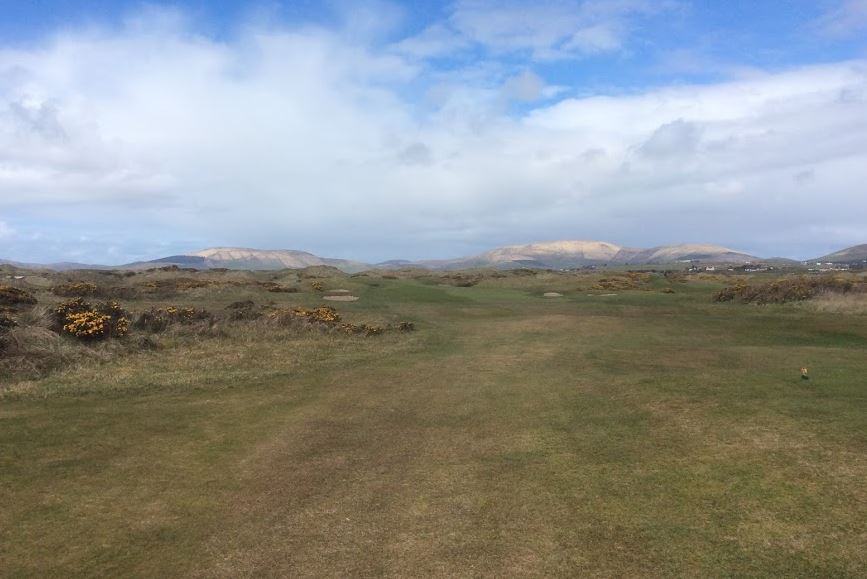 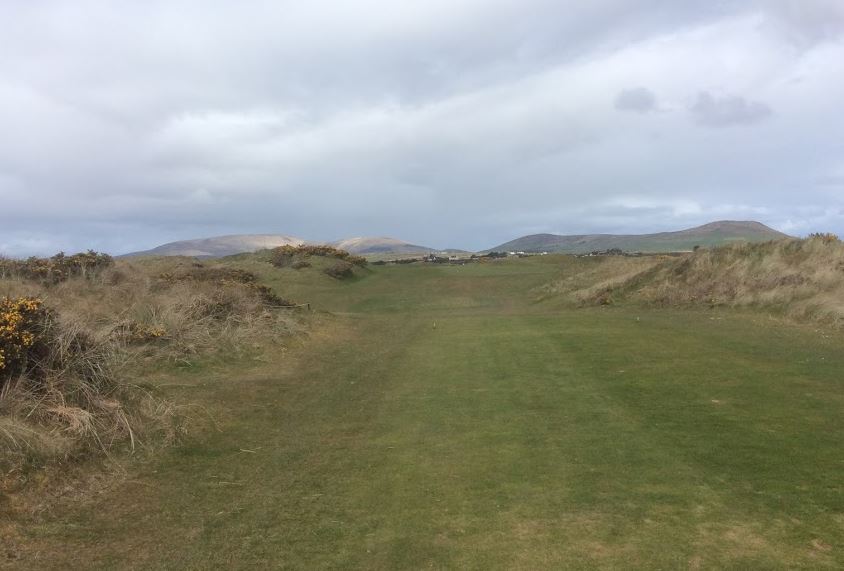 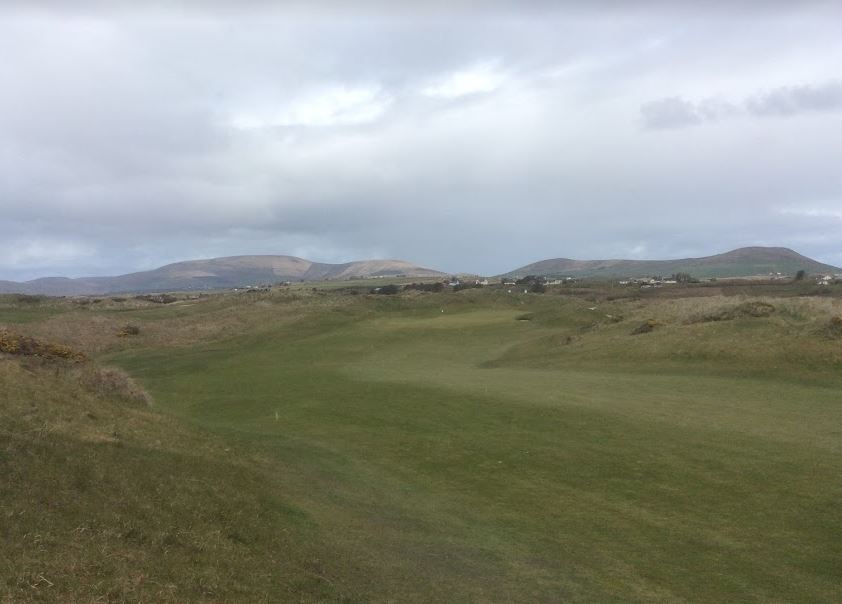 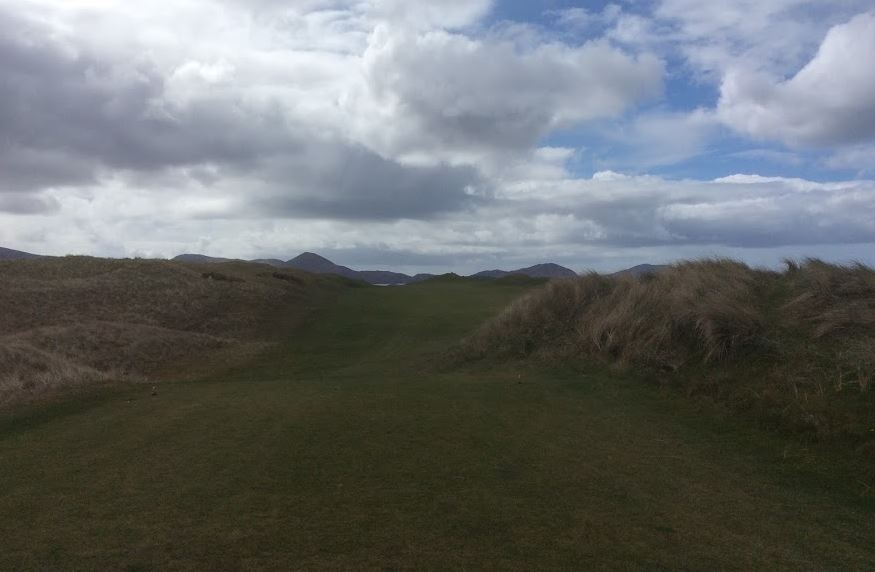 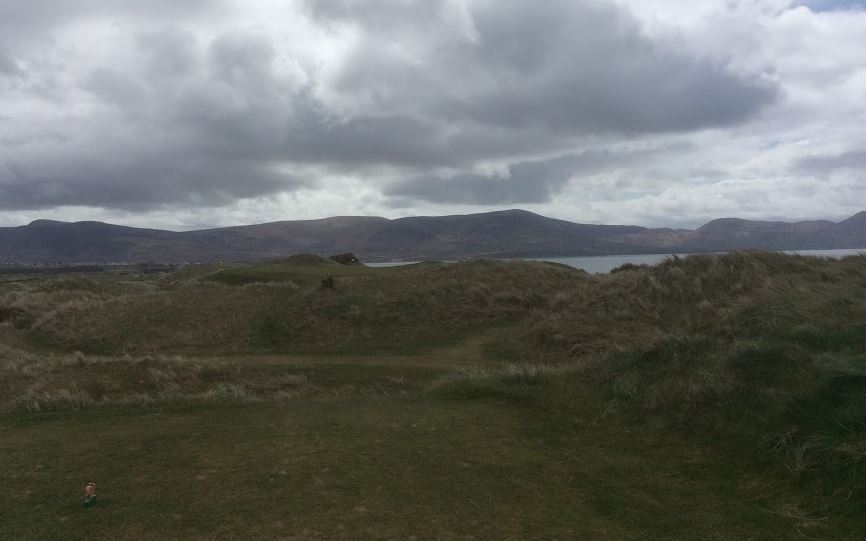 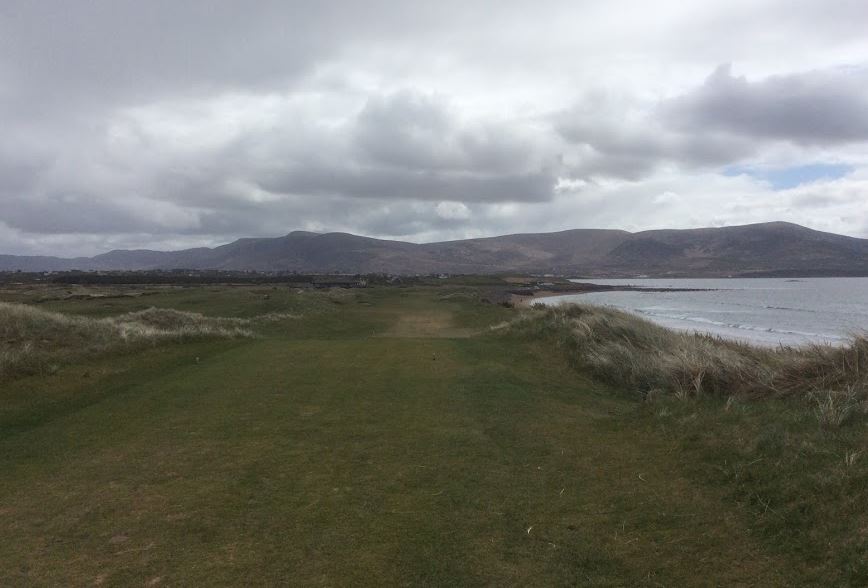 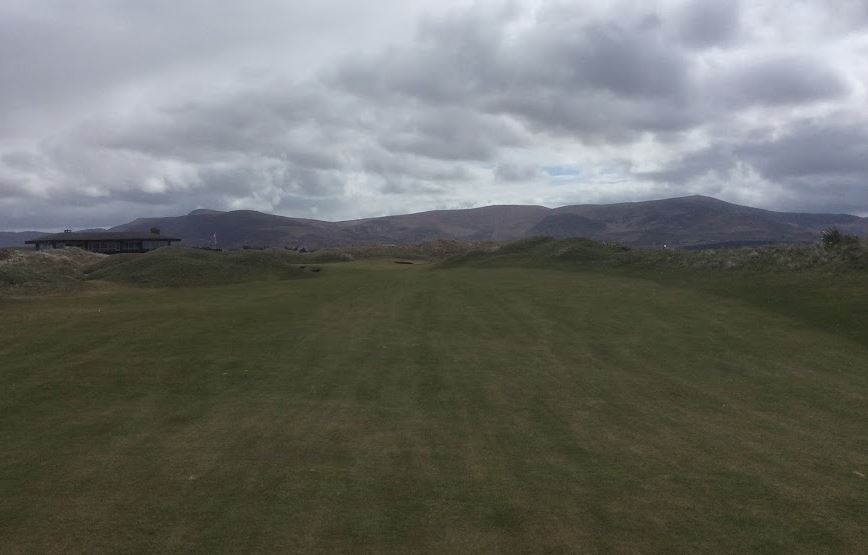 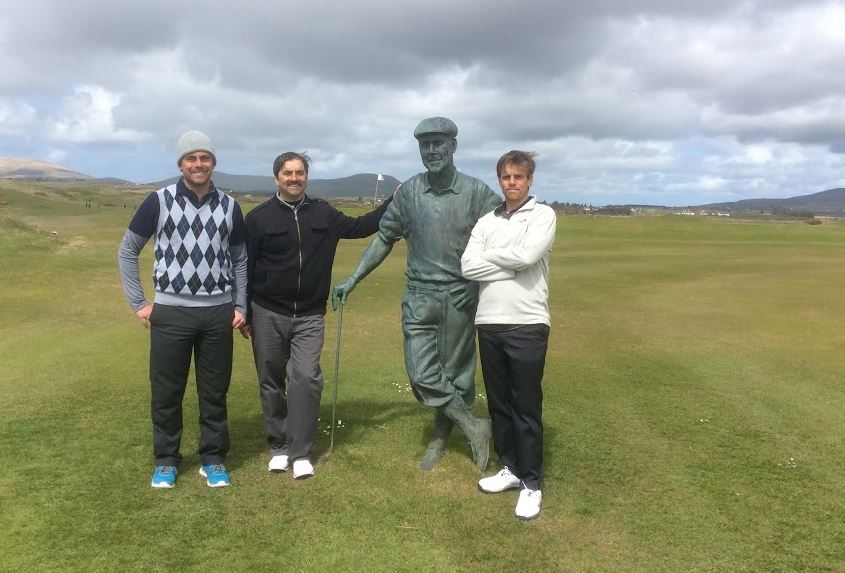 The second is the hardest on the course--a 435 yard par four with water that comes into play on the right.

I am seemingly missing photos from the third hole, but the fourth is a 176 yard par three to a green nestled among the dunes. This was among my favorite holes.

A rabbit is Waterville's logo--it is on every flag and scorecard. We first encountered one of these little guys on the fifth tee. They were much larger than the ones back at home and they actually scared my mom. I don't know what she thought they were--small cougars--but once she realized they were little bunny rabbits, she took plenty of pictures.

The fifth is a 551 yard par five. Again, I just felt like there was not much to it. Pretty big fairway with a few bunkers to avoid, but nothing intense.

The seventh is among my favorite holes on the course--a 404 yard par four with a sloping fairway and large bunkers that are more than mere decoration.

The eighth is a 402 yard slight dogleg left par four.

The ninth is a fun hole--a 405 yard par four with a fairway that is a minefield of bunkers. The approach is to an elevated green also well protected by bunkers.

Ninth tee--unfortunately this picture came out quite dark.

The tenth is one of the most difficult holes on the course--a 450 yard par four.

The eleventh is a short 477 yard par five, but any errant tee shot is punished by dunes that line the fairway. Not only do you need to be straight from the tee, but a shot hit too long will run through the fairway, as the fairway is divided into two sections. If you hit it too far, the ball will go through the first section and likely not reach the second, though the shot will be playable, it is not what you want after hitting a perfect drive.

View from the eleventh tee that shows the dunes that must be navigated.

The twelfth is the most famous hole at Waterville- a 164 yard par three that requires a complete carry of heavy fescue. Known as the Mass Hole, during a period of British rule when Catholicism was outlawed, locals would use the low portion among the dunes (now what you must carry to reach the green) to worship and hold religious ceremonies. The designer had originally intended the green to be down among the dunes where the religious observances used to take place, but local workers refused to construct on what they saw as a holy site.

I do not have a picture of the 492 yard par five thirteenth. On the twelfth, a foursome in front of us waved us up. Miraculously, on the twelfth hole, we all hit fantastic shots (though only a 164 yard yard par three, the wind made it no laughing matter). When we get to the thirteenth tee, turns out that it was the club pro that had let us play through. So, I did not want to slow anyone up on the thirteenth by taking pictures. The pro also told us that Tom Fazio, the course's designer, was out playing that day.

We heard another funny story about order of play during our round at Portmarnock. The starter told us that a few years ago Rory had come down to Portmarnock without a tee time and asked if he could get out. The starter brings Rory and his three friends to the first hole and asks the group about to tee off if they would let Rory jump ahead. Rory interjects and says that he does not want to skip anyone and will happily play behind them. The group on the first tee, without hesitation, quickly turned down the offer to have the best player in the world waiting behind them all day and kindly allowed Rory to go off in front of them.

Returning to Waterville, the fourteenth is a 416 yard dogleg left par four.

The fifteenth is a 396 yard dogleg left par four with an unprotected green.

The last three holes are where the ocean starts to come into play and, I think, the strongest part of the course. In fact, the eighteenth is one of the best closing holes I have played (especially since I often feel like closing holes are anti-climatic, such as Ballybunion and Cypress Point).

The sixteenth is a short 352 yard par four with a fairway that narrows the closer to the green you get. Despite its lack of distance, it is still ranked as the tenth hardest holes on the course.

The seventeenth is a 168 yard par three--again requiring a carry over a deep gully and tall fescue. This hole is quite similar to the twelfth.

The eighteenth is my favorite hole on the course--a 556 yard par five with the ocean along the hole's entire right side. The fairway is riddled with bunkers and bunkers guard the green. Though, as long as you avoid the bunkers, it is not a terribly difficult hole.

View of eighteenth green from fairway.

Apparently this was one of Payne Stewart's favorite courses and he would often play it to prepare for the British Open. A statute of him stands by the clubhouse.

Like I said, there was something that I missed about Waterville. I went into the round thinking I would love it in light of how highly others had reviewed it. I hope to return one day and give it another go and see if my view changes.